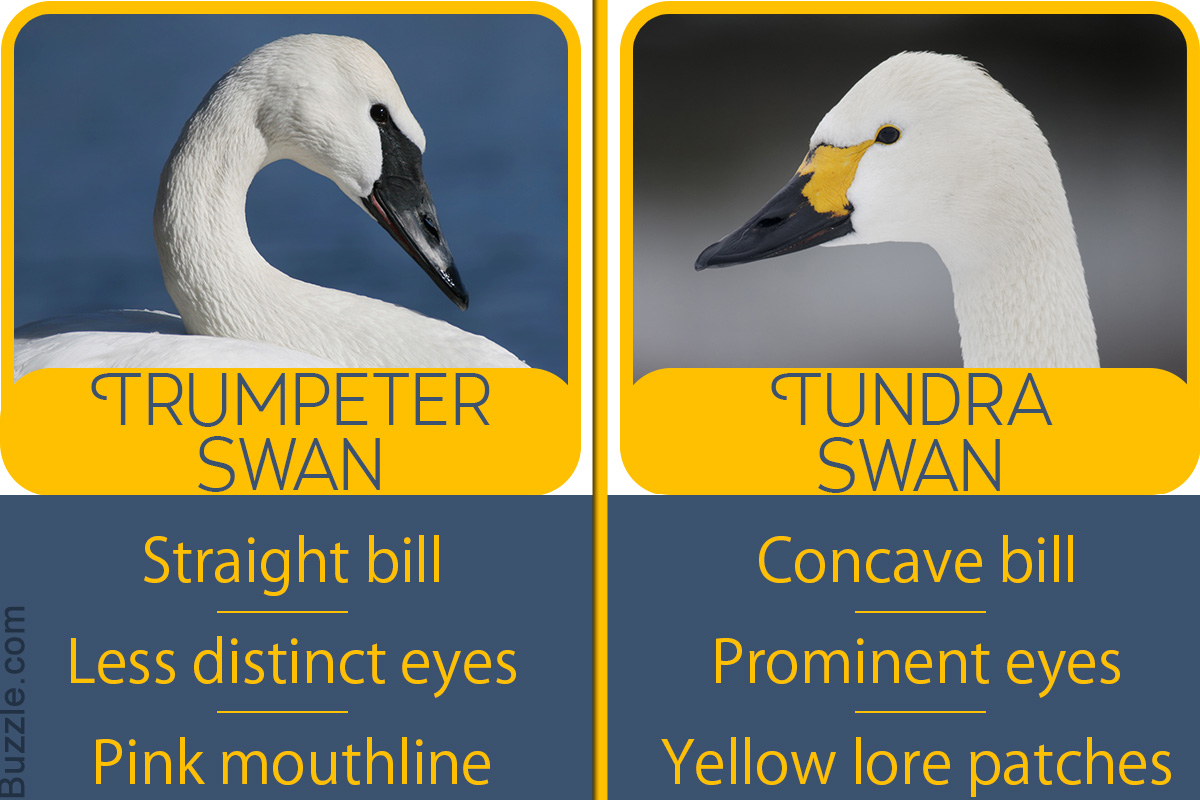 Trumpeter and tundra swans sound different, and they can be easily distinguished by their calls. While the former produce low-pitched, loud, and nasal voices; the latter make high-pitched, mellow calls.
Trumpeter and tundra swans are two of the most commonly found swan species in North America. Both these species belong to the genus Cygnus in the family Anatidae. The trumpeter swan (Cygnus buccinator) has no subspecies, but the tundra swan (Cygnus columbianus) has two subspecies – Cygnus columbianus bewickii (Bewick’s swan) and Cygnus columbianus columbianus (whistling swan). The whistling swan is most commonly found one in North America.
Tundra swans are migratory birds that breed in the tundra regions located in the Arctic and subarctic. During the winters, they fly to the grasslands and marshes in the coastal areas of North America and many other places. So, tundra swans are mostly seen during the winters. Trumpeter swans are native to North America, and only some populations are migratory. During the winters, the central Alaskan population are found to move towards southeastern Alaska, coastal British Columbia, and the mouth of the Columbia River on the south of Washington State. Other groups are found across the Great Basin region of Alberta, Washington, Oregon, Nevada, Montana, Wyoming, South Dakota, and Minnesota.
Both, trumpeter and tundra swans have similar features, and differentiating them can be a tough task. Though they look similar, these two species make distinct calls. Distinguishing them by their calls is said to be the best and most reliable method. In fact, the name trumpeter and whistling swans are derived from the nature of their calls. However, these birds may make different types of calls at different times. Apart from their calls, they have some slight variations in their physical features too. 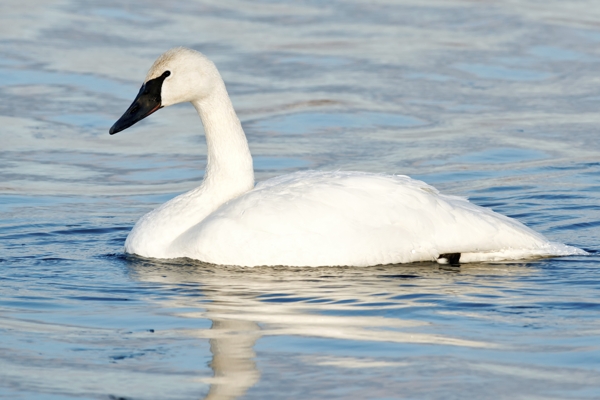 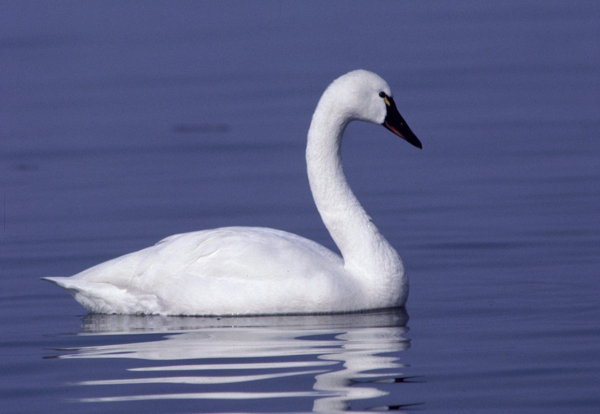 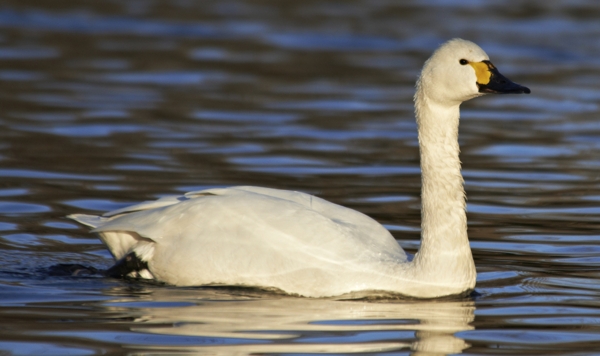 Note the Size
When compared to tundra swans, trumpeter swans are larger. In both species, the males are found to be slightly larger than the females. However, it is difficult to distinguish between the species on the basis of their size only. A male tundra swan may appear larger than a female trumpeter. Likewise, an older tundra swan can be larger than a younger trumpeter.
A fluffed tundra swan may also look bigger than a trumpeter. When it comes to tundra swan subspecies, the Bewick’s swan is slightly smaller than the whistling swan. The trumpeter has a longer neck in proportion to its body length. The ratio of neck length to body length is greater in trumpeters, when compared to tundras.
Check the Color
The plumage of adults in both species are white, and so, they cannot be distinguished on the basis of this feature. Some individuals may acquire a golden or rusty hue, especially on the neck and head. This is said to be due to the high level of iron ions in the water in which they live. 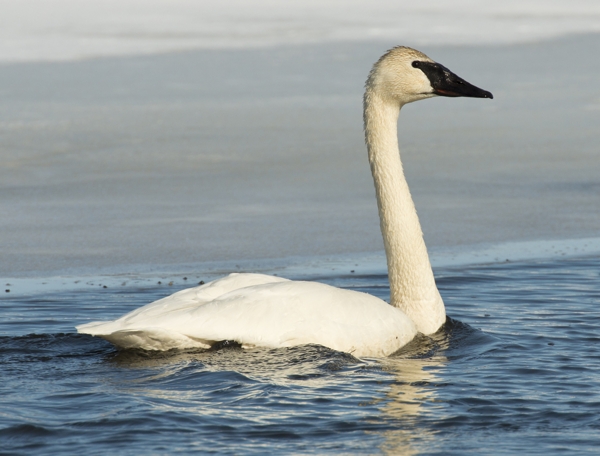 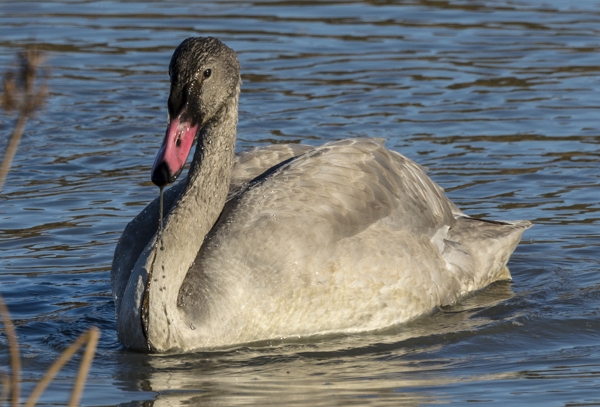 A juvenile trumpeter with pink color on its bill
The juveniles of both species have a grayish-brown plumage. Juveniles of trumpeter swans may have different degrees of yellow on their legs and feet. This color changes to black as they grow into adults. Such coloration is not usually seen in tundra swans. Young swans of both species have pink-colored bills. The color changes to black as they grow.
Those juveniles having black bills with a pink patch in the middle are most likely to be trumpeters. Usually, juvenile of tundras have pink bills (as well as lores) with black edges. However, it is difficult to differentiate the two species on the basis of a juvenile’s bill color, which can be in varying degrees of black and pink, as per the age of the bird. 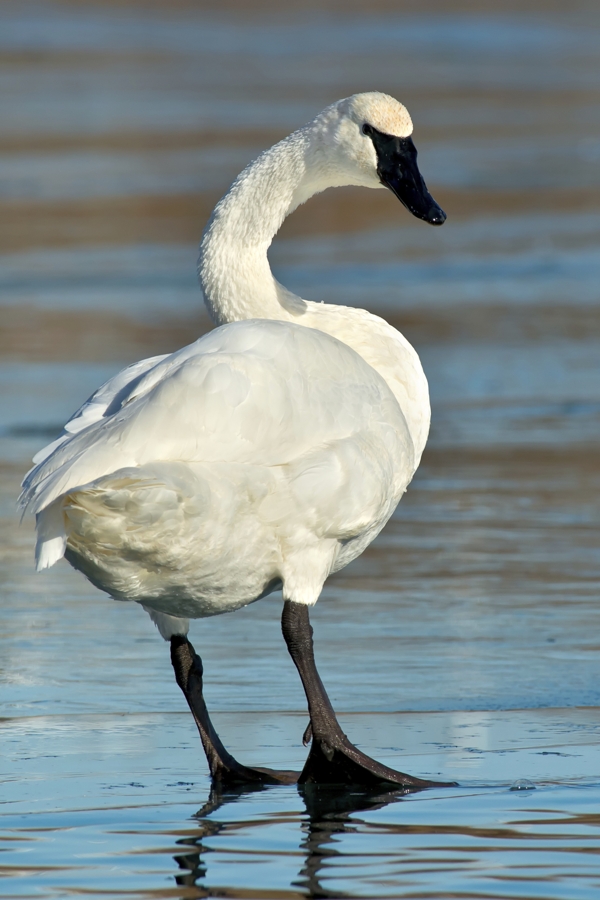 The legs and feet are black in adult trumpeters 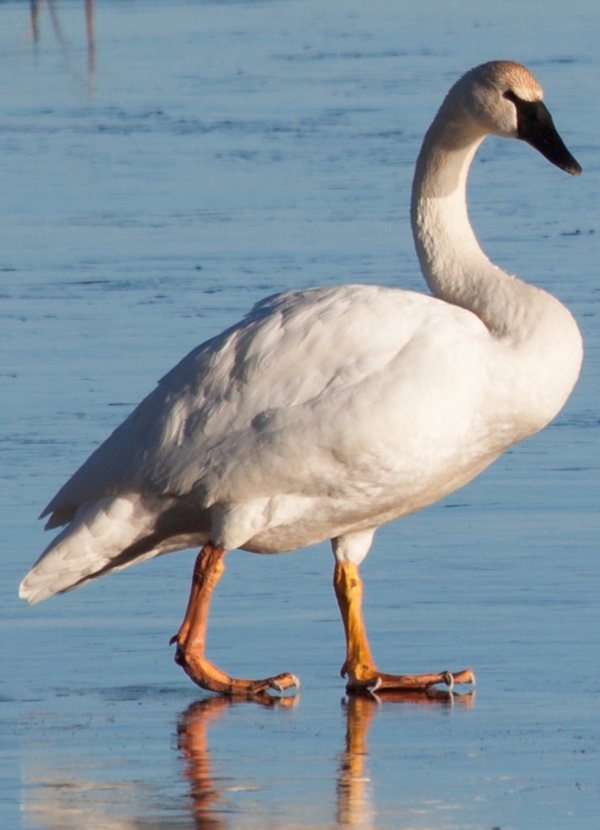 The legs and feet are yellow in juveniles.
Crack the ‘Bill’ Code
An adult trumpeter swan has a massive, black bill. Its lower mandible has salmon-pink edges. The head as well as the bill are almost flat. The black lore skin above the bill looks like an extension of the black bill. These birds have their eyes located within this lore skin, and so their eyes are less prominent. The slope of the head matches with slope of the bill. The feathers on the forehead forms a V-shape, with the point facing downwards into the lore. 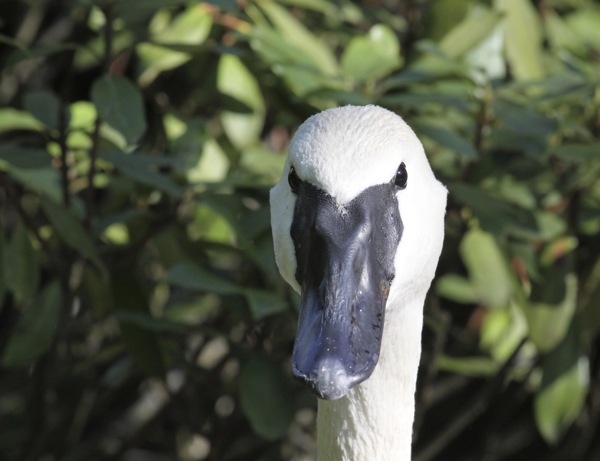 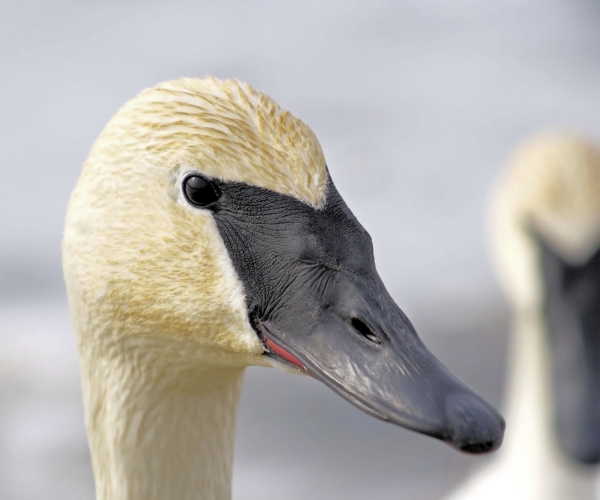 The salmon-pink mouthline and the V-shaped formation on the head of the adult trumpeter.
When compared to a trumpeter, an adult tundra swan has a smaller bill, which is black and slightly curvy. This bird has yellow patches on the lore. The patches are bigger and more prominent in the Bewick’s swan. The eyes are more prominent, as they are located within or connected to the narrower tips of the lore skin. The head is rounder or squarish.
The feathers on the forehead form a U-shape, with the curve pointing downwards into the lore. However, these features may not be the same for all individuals. The size of the yellow patch on the lore may vary, with some birds having no such marks. The beak can be straight in some individuals. Tundras may also have their lower mandibles with slightly colored edges. 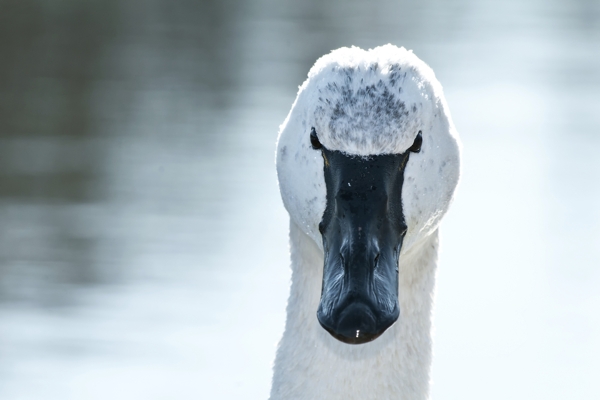 An adult tundra swan has a U-shaped formation on its head,and yellow spots on the lore. 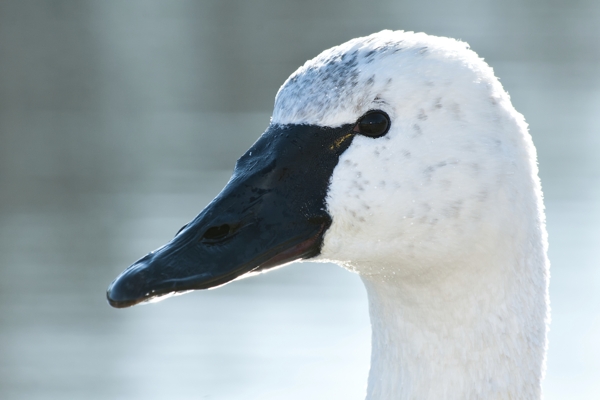 Understand Their Habits
Trumpeters are often found moving their heads and necks in an up-and-down fashion, along with different types of vocalizations. Such head bobbing and vocalizations are very prominent prior to flight, or when they are disturbed. This is not characteristic of tundra swans, who are found to extend their heads and necks to greet one another. Occasionally, these swans may move their heads up and down. The S-shaped kink in the neck is more prominent in resting trumpeters.
Being larger than tundra swans, trumpeter swans move slowly. When compared to trumpeters, tundra swans are more agile. During takeoff and flight, tundra swans keep their necks straight. Trumpeters may keep their necks slightly kinked, during the short interval between takeoff and flight. It has also been noted that trumpeters are the last to fly from a place where they are seen along with tundra swans. The wing beats of tundra swans are not as loud as that of trumpeters.
Aquatic plants constitutes the main diet of both species. While the winter habitat of tundra swans include grasslands and marshlands in coastal areas, trumpeters are often seen in riverine wetlands, lakes, marshes, and estuaries. Most of the distinguishing features discussed above are not conclusive, as the features may vary slightly from one individual to another.
So, it is better to check all the characteristics if you want to identify any of the two species.

admin - November 27, 2017
0
Strikingly original, your Sphynx is like no other cat out there; well, it surely doesn't resemble any furry feline by a long shot. Buzzle...

admin - November 28, 2017
0
Did You Know? While ocean dolphins possess a dorsal fin, pink dolphins have humps on their backs instead of dorsal fins. Amazon River Dolphins Pink dolphins, also...