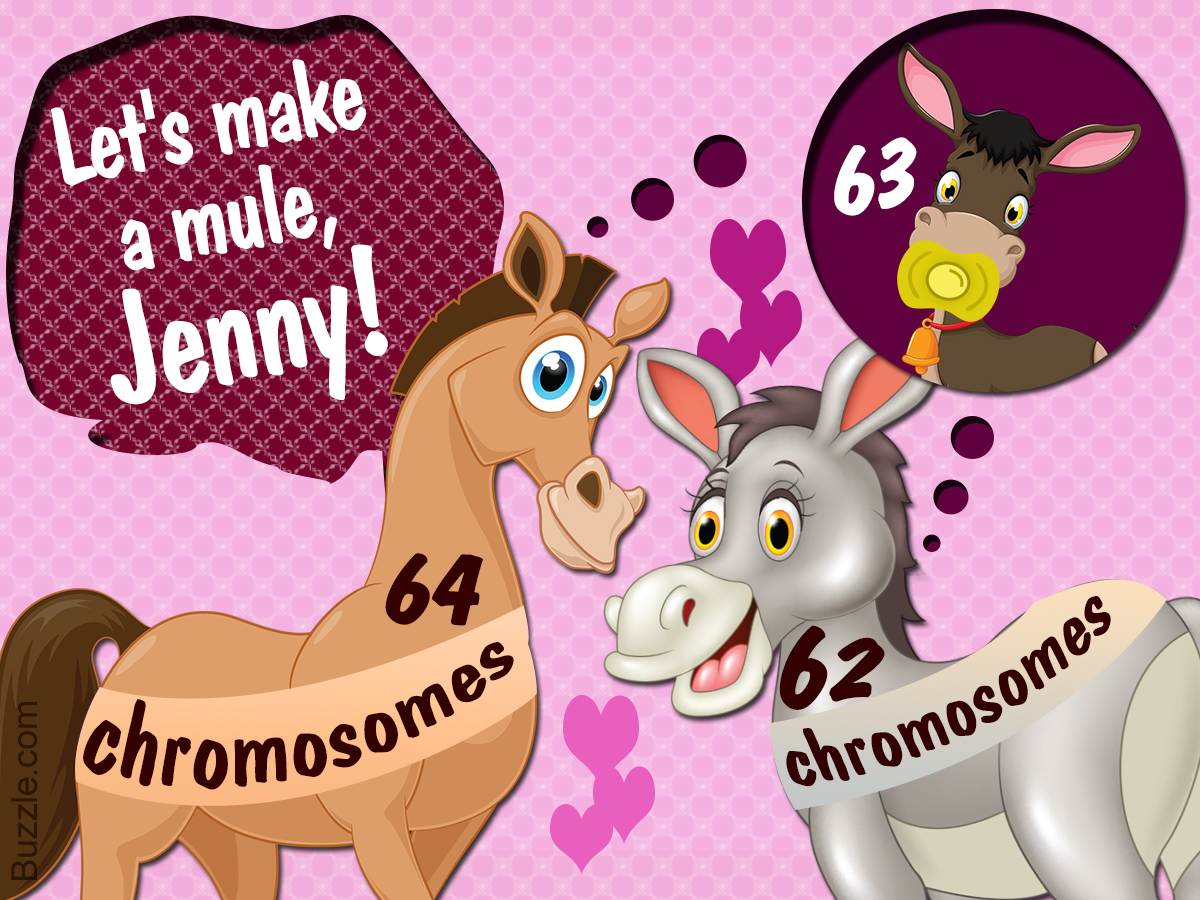 The braying of a mule is characterized by a ‘whinny’ like its parent horse, and ends with the ‘aw ah aw’ of its parent donkey.

The Equidae family has a genus ‘Equus’ that includes the horse, (Equus ferus caballus ), the donkey (Equus africanus asinus), and the zebra (Equus quagga). While the zebra is characterized by stripes, the other two are quite similar in appearance, though there is a marked difference in their size, nature, and endurance levels.

The cross breed of a horse and a donkey is a mule. All three four-legged species have long ears and faces along with a long back and a tail. Their coats are also similar in appearance and texture.

Distinguishing the three―horse, donkey, and mule―in detail may seem like a job of an expert; however, it is actually a matter of few traits that sets them apart.

Horse – The horse that we see now has undergone about 40-55 million years of evolution. Its domestication started around 4,000 BCE. Back then, it was used for travel, warfare, and hunting. In this modern day and age, the horse is used for sports, fun rides, or cultural ceremonies. It is seldom used for burdening.
Donkey – The start of its domestication can be traced back to roughly 3,000 BCE. Since then, it is being used as a draught animal in the developing countries.
Mule – Its origin and history remain disputed till this day, but safe assumptions can be made about its existence upon the basis of the history of its parents. It is often used for traveling and burdening in rugged terrains.

Horse – It is spectacular with its lustrous and shiny coat. In comparison to donkeys and mules, it has a longer face, shorter ears, small and rounded eyes, luscious mane and tail hair, and a curvaceous back to hold the saddle. The hooves are also bigger than that of a donkey.
Donkey – The word burro in Spanish, means donkey, which was referred to as an ‘ass’ till the 18th century. When compared to a horse, it has a shorter face and mane, wider eyes, thin limbs, and narrow hooves. The ears are longer and are further marked by a darkening at their base and tip.
Mule – A ‘jack’ (male donkey) and a ‘mare’ (female horse) when crossbred, produce a ‘mule’. While, a ‘stallion’ (male horse) and a ‘jenny’ (female donkey) produce a ‘hinny’.
It has, both, a long face and long ears. It has harder hooves and is sturdier than a horse. Its muscles appear smoother in comparison to that of a horse.

Horse – Social by nature, it prefers to move around in herds and form harems. It is extremely responsive and active. It possesses a body language that tips towards a fight or flight tendency.
Donkey – It is usually found straying off alone and later ending up in pairs. It is known for being stubborn, which is suggestive of self-preservation, unlike horses.
Mule – It retains the best qualities of both― horse and the donkey―namely: patience, sure-footedness, obstinacy, and intelligence. It can carry a dead weight (still and inanimate burden) up to 20% of its total weight and live weight (such as a person) up to 30% of its total weight.

Horse – It has 64 chromosomes. Specific genes contribute to the variety of its coat color.
Donkey – It has 62 chromosomes in all.
Mule – With an odd total of 63 chromosomes, it is often sterile. In rare cases, where a female mule may be able to bear a fetus, it is called a “molly” or “molly mule”.

Horse – The coat of a horse may have varied colors―chestnut, black, gray, bay or pinto. White color coats, which are a rarity, are actually gray coats that have faded with age.
Donkey – The coat of a donkey is characterized by the color gray or dark brown. It is said to have a ‘Christian cross’, that is actually a dorsal stripe (from mane to tail) and a crosswise stripe on its shoulders.
Mule – A mule’s coat may derive color from any of its parents, but mostly, it has a brown or bay-colored coat.

A close observation of these three species helps us to notice the features and patterns, which we tend to miss out at first sight. It is remarkable that a mule is blessed with both the coat textures of its parents―the donkey and the horse. It takes on the donkey’s coat in the summers and that of the horse’s in winters.

admin - November 27, 2017
0
When it comes to choosing a feline as a pet, there are numerous options. Whether it be the size, coat color, or personality, you...

Top 10 Dumbest Dog Breeds Ever! And You Thought They Were Clever

admin - November 28, 2017
0
"The average dog is a nicer person than the average person." ―Andy Rooney Indeed he is. Never heard a truer truth than this one. Dogs, as...

A Pet Care Guide: Which Essential Oils are Good for Dogs?

admin - November 28, 2017
0
Useful Tip! Always use therapeutic-grade essential oil for medical purposes. We often depend on antibiotics, corticosteroids, antihistamines, dog shampoos, and many other synthetically prepared medicines to...