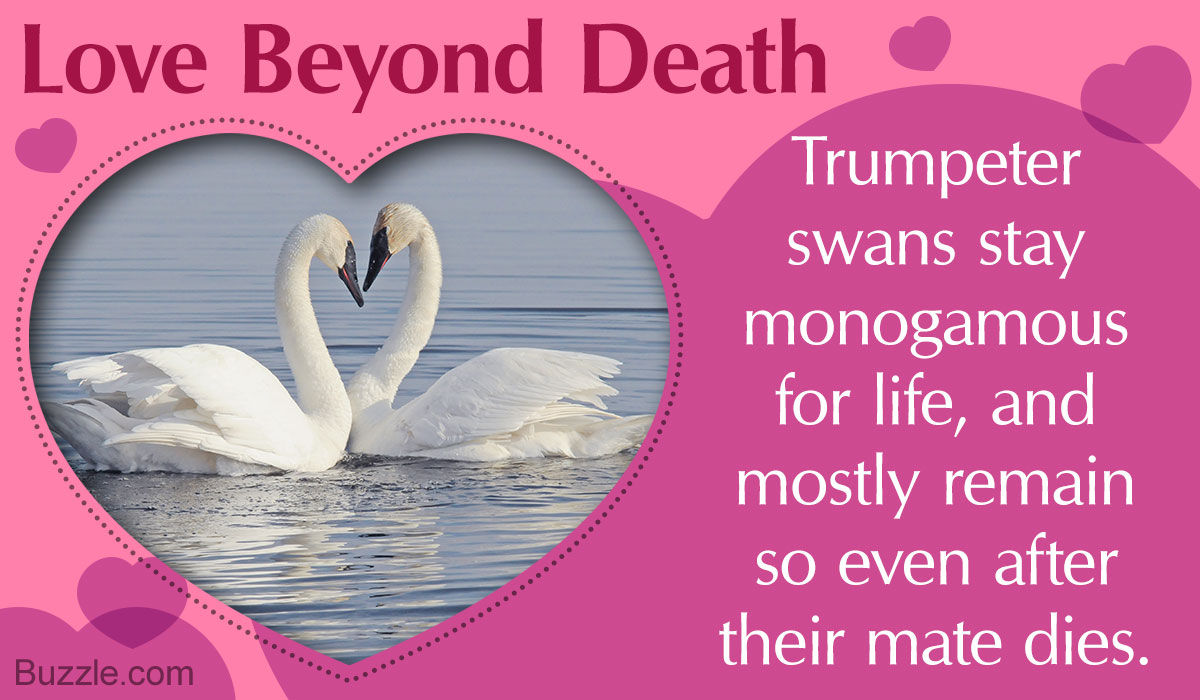 The Trumpet of the Trumpeter
In 1970, an American writer E. B. White published a children’s novel The Trumpet of the Swan about a mute trumpeter swan named Louis, who learns how to play a trumpet to impress a beautiful swan Serena. How endearing!
In the above-mentioned novel, the trumpeter swan, Louis, who is mute since his birth, is helped by his human friend Sam as well as his father. Louis’s father gives him a trumpet so that he can make trumpet-like sounds just like other swans do, to communicate and find a mate. In reality too, it is a fact that the trumpeter swan’s sound is deep, loud, and pleasant, which bears resemblance to a trumpet or French horn. This may be the reason for the name ‘trumpeter swan’.

Apart from its distinct sound, it is the heaviest bird that is native to North America and almost came to the brink of extinction in the early 20th century, but its numbers have recovered from then on. We dig deeper to further come up with interesting facts about this large waterfowl.

Scientific Name
The scientific name of the trumpeter swan is Cygnus buccinator.
Classification
The trumpeter swan is a species of swan, which is a largest existing species of waterfowl. Belonging to the genus Cygnus, the species is considered as a close relative of the whooper swan of Eurasia.
Range
This species of swan can be found scattered across North America, i.e., mainly Alaska, Canada, and northern United States. However, some trumpeter swans are found in Wyoming and Michigan as well. Around 85% of the world’s breeding population is found in Alaska.
Appearance 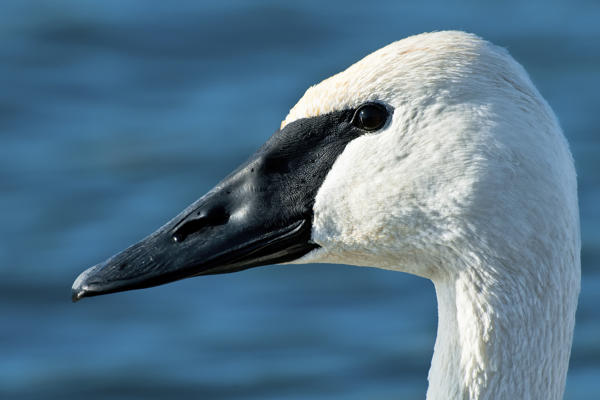 The Most Distinguishable Feature – Black Bill
● An adult trumpeter swan’s length can be measured up to 130-165 cm long. Male swans can grown up to 180 cm in length and weigh around 10.9-12.7 kg, while female swans weigh around 9.4-10.3 kg. The wingspan of the trumpeter swan ranges between 185-250 cm, with 60-68 cm of wing chord.
● The most striking feature of this swan is the presence of a black bill that is shaped like a wedge. In certain instances, there a salmon-pink coloration noticed around its mouth.

● The trumpeter swan is generally pure white in color. However, its head and necks are often stained due to contact with the wetland bottoms during feeding. Cygnets (young ones) are usually gray in color, which whitens over time.

● A young cygnet’s bill is mostly pink with black color at the base. Their feet are grayish-yellow in color. In adults, the bills, legs, and feet are all black. The trumpeter’s iris is usually brown in color. It is harder to distinguish between male and female trumpeter swans as they look similar. However, male swans are larger than the female ones.

Lifespan
The trumpeter swan can live up to 12 years in wild and up to 35 years in captivity. Young swans have 40% chances of survival, whereas adults have 80-100% of chances.
Habitat
● These swans inhabit lakes, ponds, large rivers, and coastal bays. Earlier, they used to prefer freshwater than the saltwater; however, now that is not the case. They prefer water bodies with land that has food accessibility, shallow, open, and unpolluted water, and no human disturbance.

● They prepare their nests on a slightly elevated ground near a water body. Nests are usually in the shape of a large bowl, made with grass, emergent vegetation such as cattail or bulrush, and some feathers. 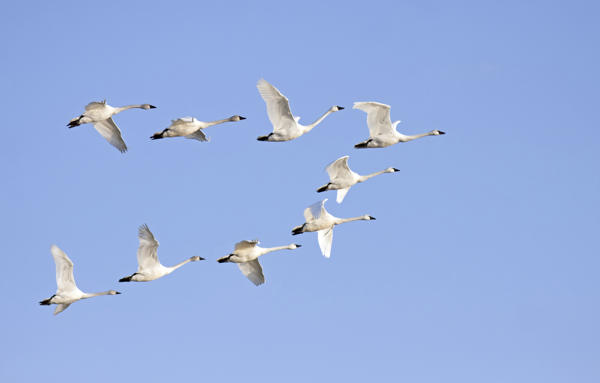 Trumpeter Swans Forming V-shape during Migration
The trumpeter swan is one of the heaviest birds, which is capable of flight. They fly with their necks aligned entirely straight. When migrating, these birds usually fly in a V-shaped flock.
Diet 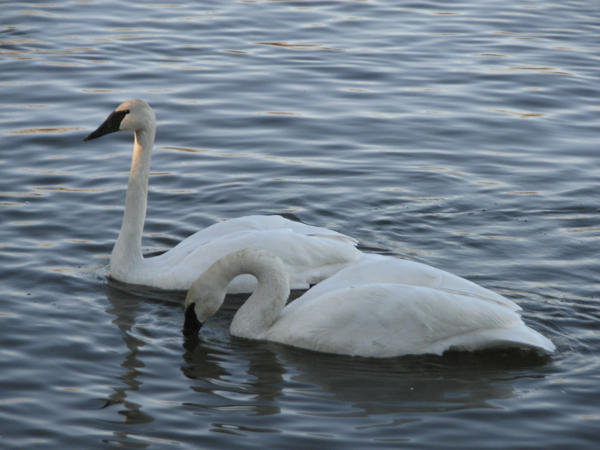 Trumpeter Swan Submerging itself for Food
Their diet almost entirely consists of submerged aquatic plants. They eat leaves, stems, and dig underwater to eat roots and tubers. Grass and grains can also be included in their diet. The young cygnets are fed with insects, small fish, and fish eggs as well. Their feeding activity is at the peak in spring as they prepare for their breeding period.
Predators
● Raven, raccoon, wolverine, black and brown bears, coyote, gray wolf, northern river otter, snapping turtle, California gull, great-horned owl, American mink, golden eagle, bobcat, and red fox are the common predators for adult and young trumpeter swans.

● A trumpeter swan defends itself with its large wings. It hits or attacks the predators and intruders with its wings by bumping into them.

Behavior
● Trumpeter swans are social birds living in small flocks. Their routine changes according to the season. In winter, they eat less and rest more. On the other hand, they eat more and have active days during spring.

● During the mating season, trumpeters become territorial. They become violent towards competitors, other swans, or animals that invade their space.

● In the breeding season, they perform a mating ritual including calls, spreading wings, and head bobbing to reunite with the old mate or attract a new one. Trumpeter swans are considered monogamous as they have same mate in every breeding season. Most pairs are formed at the age of 4 to 7 years. The process can start as early as 2-4 years of their age. On the other hand, some swans may not form a pair till the age of 20 years. Though monogamous, ‘divorces’ are not unheard of among them. Mostly, after their partner’s death, male swans do not mate again for the rest of their lives.

admin - November 28, 2017
0
Dogs Can Sense Sadness Dogs can instantly understand if their owner is sad. They will try to cheer up their owner by cuddling or snuggling...

admin - November 28, 2017
0
Did You Know? The Labraheeler belongs to both herding and sporting categories. Labrador retriever mixes are among the cutest mix breeds. One such hybrid is the...

Exotic Cat Breeds That Look Very Much Like Wild Cats

admin - November 27, 2017
0
Dogs are deserving holders of the 'man's best friend' moniker, but cats? Cats happen to be a whole different ballgame. One might think of...