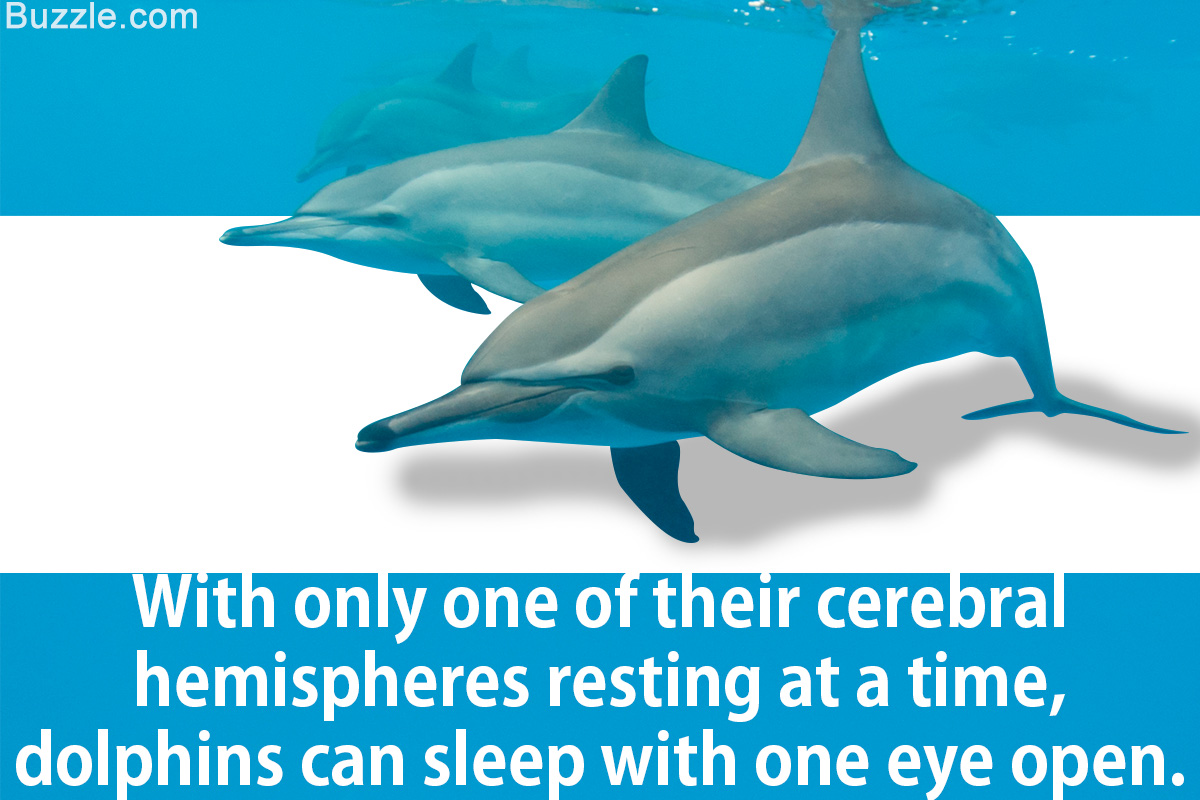 Did You Know?
A dolphin needs 8 to 12 breaths a minute when fairly active. The breathing rate can drop to 3 to 7 breaths per minute while resting. It can catch a catnap between trips to the ocean surface.
Dolphins, the aquatic mammals, are known for the acrobatic leaps that they make out of the water and also for their stunning performances in various shows. They have been very friendly to humans since time immemorial. They are helpful and playful by nature, and are quite energetic too. Trained dolphins can be quite entertaining and so are commonly seen in aquariums, TV shows, and movies. You must have observed that they need to come to the surface for breathing.
Most fish breathe through their gills, but dolphins breathe air using their lungs. They breathe through a blowhole on top of their head. It is covered by a muscular flap when they are underwater, and it opens to exhale as they reach the surface. They surface at regular intervals to exhale and inhale air. A group of dolphins is called a ‘school’ or a ‘pod’. Male dolphins are called ‘bulls’, females ‘cows’, and young dolphins are called ‘calves’.
Humans breathe involuntarily, but dolphins have to decide when to breathe. They have to be conscious to breathe. This means that they cannot enjoy a sound, deep sleep, because then they would run out of breath. Mother Nature has solved this problem by offering them an exclusive skill with the help of which they can let one half of their brain sleep at a time. Various studies on dolphins have proved this fact.
Usually, fish reduce their activity and metabolism, and take some rest. But they remain alert to prospective predators. Most fish do not have eyelids, so their eyes remain open during such periods of ‘suspended animation.’ This type of rest performs the same restorative function as ‘sleep’ does in other animals and humans. But if dolphins sleep like this and if they fail to come to the surface for breathing, then they would suffocate and die. So, how do they manage to sleep without drowning?
How Do Dolphins Sleep?
Like all other fish, dolphins get plenty of exercise as they’re constantly swimming around. They also need rest. With only one of the cerebral hemispheres resting at a time, dolphins can sleep with one eye open. The cerebral hemisphere that is working (not shut down) monitors the activities in the surrounding environment and controls breathing functions. This type of sleep is called ‘unihemispheric sleep.’ The eye to the opposite side of the sleeping half of the brain remains open. Dolphins need to keep a part of the brain alert to trigger each breath. Researchers have studied the brain wave patterns of sleeping captive dolphins. Through the electroencephalograms (EEGs) of dolphin brains, they have found that one of the two cerebral hemispheres of the brain remains awake, while the other goes into a state of deep sleep (described as ‘slow-wave sleep’). Sleeping dolphins are quite close to unconsciousness, but at the same time, they are aware enough of their surroundings to wake up completely if needed. This type of sleep helps them to come to the surface for breathing, and also to watch for possible predators and threats. It also helps regulate their internal body temperature. It is probably something like the semi-conscious state that we experience as we meditate or as we begin to fall asleep.
Dolphins in Captivity
In captive dolphins, scientists have found that both hemispheres of brain can go into a ‘slow-wave sleep’ mode simultaneously. They can sleep with both eyes closed. They do not respond to mild external stimuli when they are fast asleep. The process of respiration continues and does not get affected. A tail kick reflex helps keep the blowhole above the water, whenever required. More research is needed to know whether dolphins in the wild reach this state.
When Do Dolphins Sleep
Dolphins don’t sleep at a specific time, like we humans do, and they usually sleep as a group. Most of the pod goes into the half-sleep mode at the time. They just ‘switch off’ when safe. So, they are often found ‘daydreaming’, saving energy.
Where Do Dolphins Sleep? 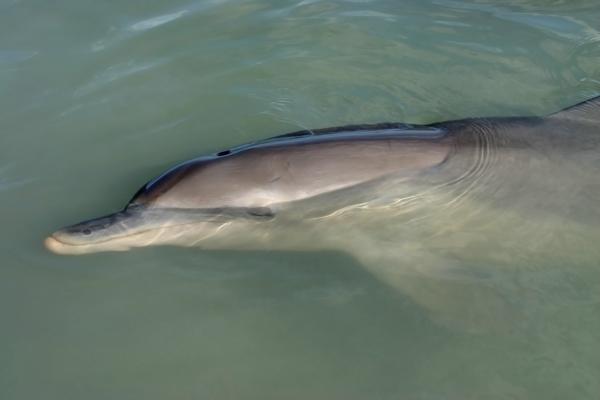 While going into the sleep mode, dolphins prefer to stay close to the surface of the ocean so that they can come up for air easily. They can also rest at the surface with their blowhole exposed. This is the reason why they are sometimes seen ‘logging’, swimming slowly along the surface, with very little movement. They (mostly dolphins in captivity) may rest at the bottom, if the water is shallow, and come to the surface for breathing at regular intervals.
Pattern of Swimming During Sleep 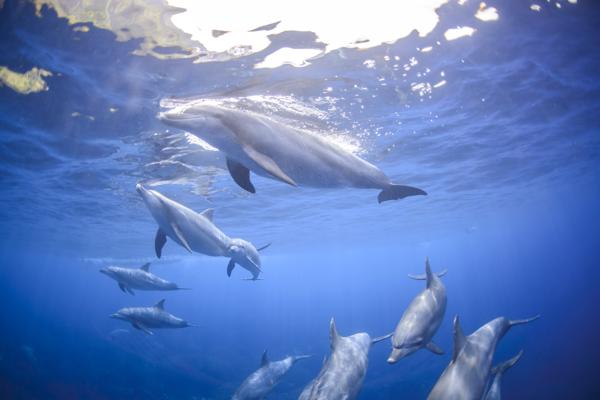 A study was conducted by the University of California at Santa Cruz on Pacific white-sided dolphins. Researchers found that the dolphins swim in a circle with the open eye facing other dolphins in the circle. Predators are less likely to attack a group of large animals. The tight circle minimizes the chances of being attacked by predators. Once the dolphins get sufficient rest, the school breaks up, and they continue with their normal activities. Adult male dolphins usually travel in pairs, and often swim slowly side by side as they sleep.
How Long Do Dolphins Sleep in a Day?
Researchers have observed that dolphins can be in the state of unihemispheric sleep for approximately eight hours a day. But this may not apply to each and every species of dolphins. The Indus river dolphin exhibits a completely different sleep pattern. These dolphins have to face strong water currents and harmful floating debris. To avoid serious injury, they need to swim continuously. As a result, they sleep in very short bursts. They can enjoy short naps, lasting between 4 and 60 seconds. Most dolphins sleep frequently throughout the day in short periods, and at the end of the day, accumulate a total of about 8 hours of rest. Electroencephalogram (EEG) readings show that bottlenose dolphins spend an average of 33.4 % of their day sleeping. According to a study report published in the Journal of Experimental Biology, dolphins can maintain nonstop vigilance for at least five days without experiencing any physical signs of sleep deprivation.
How Can Dolphins Hold Their Breath Longer?
What About a Cow and a Calf?
Unihemispheric sleep is beneficial for both the mother dolphin and her calf. Like in all other species, dolphin calves are especially vulnerable to predators like sharks. So the mother swims, towing the calf along in her slipstream. This type of positioning (placement) is called echelon swimming. The mothers also want their calves near them for nursing. It would be dangerous for the mothers and the calves to fall asleep. A 2005 study on captive bottlenose dolphins and calves showed that, at least at the surface, for one month after the birth of the calf, both mom and calf appeared awake 24/7. Gradually, they started taking short naps. In this study, the pairs were observed only at the surface. In 2007, a similar study showed that the mother and the calf at the surface did not sleep for about 2 months after the calf was born. They occasionally rested with an eye closed, but only for brief periods. Females and young dolphins are often seen traveling in larger pods. They usually rest in the same general area. It has been noticed that their friends swim alongside and guide them.
Human breathing is a constant, involuntary process. On the contrary, dolphins are conscious breathers. The sleeping habits of dolphins are suitable for schooling behavior in a marine environment. They are well-equipped with a voluntary respiratory system to handle underwater sleeping. It’s good that human beings have not yet mastered the art of putting half of their brains to sleep, otherwise most people would have been found half-asleep, daydreaming at their desks!

admin - November 28, 2017
0
Dogs! If you're amazed by the tales of spoiled celebrities going overboard with new ways to luxuriously pamper themselves, you won't believe the money...

admin - November 27, 2017
0
Since 600 A.D., cats have been revered and respected in Japanese culture. They were given special attention even in the royal courts. The most...

12 Dog Breeds that Look Like Foxes and are Devilishly Handsome