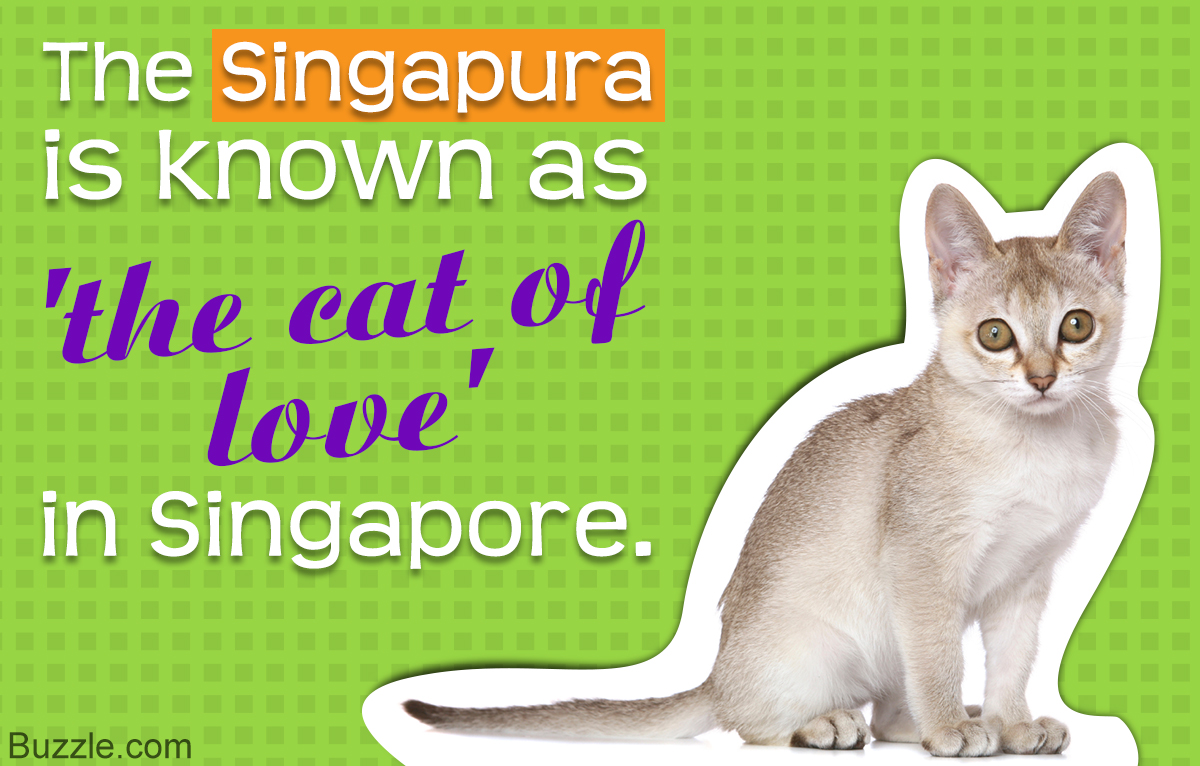 When it comes to choosing a feline as a pet, there are numerous options. Whether it be the size, coat color, or personality, you can choose from a wide range of established as well as non-established breeds. While some people opt for large and medium-sized cats, small cat breeds are also equally in demand.

Some of the popular cat breeds of small size include the Russian blue, Cornish Rex, Modern Siamese, Nebelung, Devon Rex, and Singapura. The honor of being the smallest recognized cat breed goes to the Singapura, which is claimed to have originated from the drain cats of Singapore. They are among those breeds that are very much in demand, but are rare and highly expensive.
Singapura – The Smallest Cat Breed 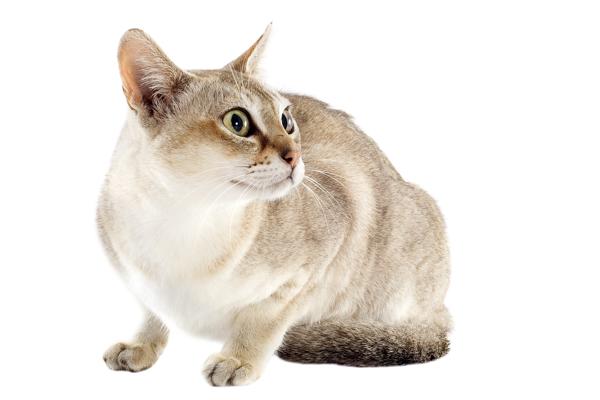 Even though there are various small cat breeds, the Singapura is considered the smallest among them. This cat breed is listed as the world’s smallest domesticated cat breed in the Guinness Book of World Records. It is a slow-growing cat, and may take anywhere between sixteen months to two years to attain full size. The weight of a Singapura cat can be as low as four pounds. The average male can weigh between 6-8 lbs., while a female weighs between 5-6 lbs.
How Does a Singapura Cat Look Like? 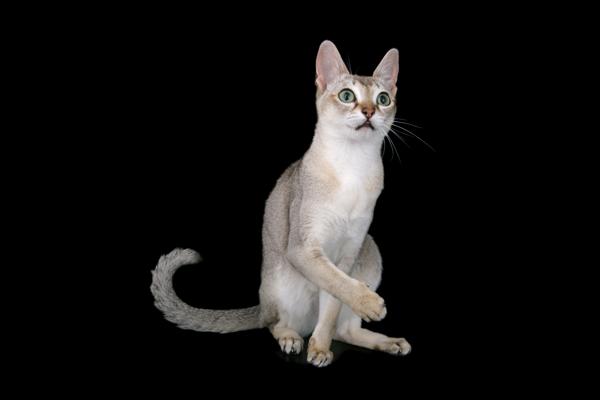 Their characteristic features include the short and smooth coat, large ears, and almond-shaped eyes, which can be amber or green in color. According to breed standards, the coat color of this cat breed is sepia agouti, which is described as ivory ground color with dark brown ticking. In short, each strand of hair has two colors – ivory color at the base and dark brown tips. The tail of this cat is usually slender with a blunt, black tip. These cats are slim, but muscular and stocky in nature.
Origin and History of the Breed 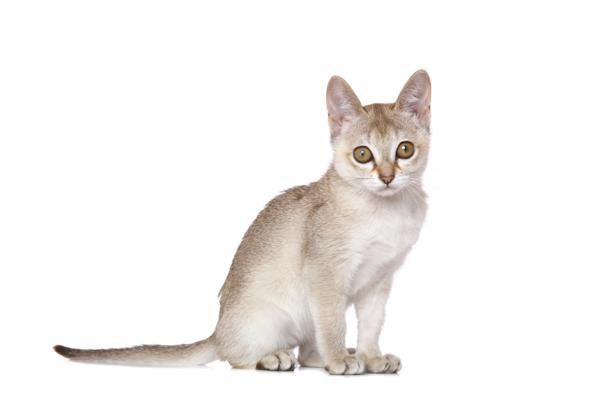 Though the Singapura is a registered cat breed, their origin is still shrouded in mystery. The breed is claimed to have originated from three ticked, sepia-colored cats that traveled from Singapore to the U.S. in 1975. They were brought to the United States by two American expatriates from Singapore, named Tommy and Hal Meadow. They were staying in Singapore for several years, and as per their claims, the cats (named Tess, Tickle, and Pusse) were actually common street cats (also called drain cats) of Singapore. It is true that small, brown cats with ticked coats have been found on the streets of Singapore since 1960. Once they reached the U.S., Tommy and Hal Meadow started special breeding programs to get rid of undesirable traits in these cats. They also tried to bring some consistency in traits, like color, coat pattern, personality, and disposition. They named the breed as ‘Singapura’, in honor of the country of origin of these cats. Later, these cats were recognized as a separate breed, by the CFA (Cat Fanciers’ Association).
The Controversy 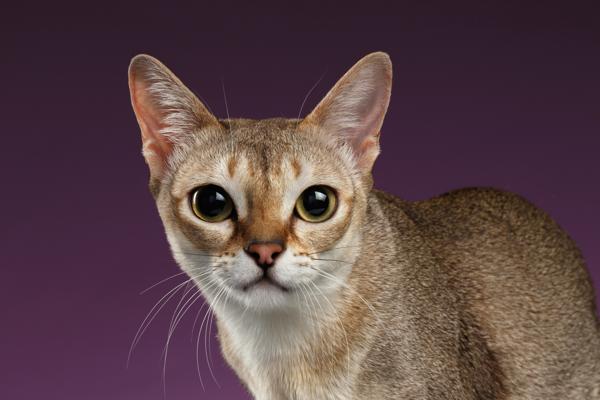 It began with the discovery that the three cats (from whom the breed is claimed to have originated) were actually taken to Singapore from the United States, during 1974. They were registered as Abyssinians in the import papers. The fact that Meadows were breeders of Abyssinians, Burmese, and Siamese breeds, added to the speculation that the three cats were actually crossbreeds of Burmese and Abyssinian cats. The Singapura cats resembled these breeds to a great extent. Though an investigation was conducted, the CFA was convinced with the explanation provided by the Meadows. The status of Singapura cats as a natural breed was retained. However, genetic studies show little difference between Burmese cats and Singapuras. Even the small size of the breed is claimed to be a rarity in natural breeds. So, the natural breed status of Singapuras is a much-debated subject. This cat is known in Singapore as ‘Kuchinta’, which means ‘the cat of love’.
Breed Personality 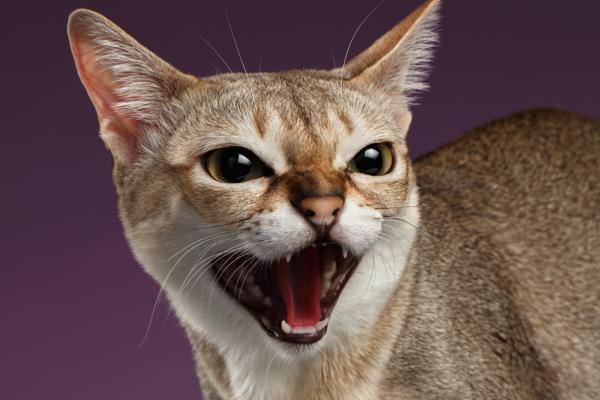 Singapuras are adorable cats that are often described as playful, affectionate, intelligent, and curious. They like to be surrounded by people, and love attention. They are smart and friendly, and are found to retain their playful nature throughout their life. These cats are often seen perched on high places, so that they get a better view of the surroundings. Though some cats can be shy towards strangers, most of them gel well within a short period of time. Singapuras are also found to be friendly to other cats and pets, like dogs, provided they are introduced at a very young age. They can also sense the moods of people around them, and may act accordingly. If possible, avoid loud noises that can frighten these cats.
Health Concerns 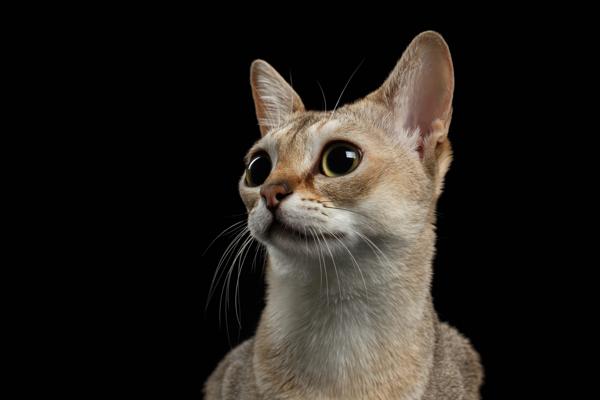 Though the Singapura is considered a healthy cat breed, it is prone to certain medical conditions. They may develop a pregnancy-related problem, called uterine inertia. The condition is characterized by weak uterine muscles that lack the capacity to push out the fetus. Such cats may require cesarean section for childbirth. Another concern is the possibility of genetic problems due to continuous inbreeding. Prevent obesity to avoid general health problems in this cat.
Grooming 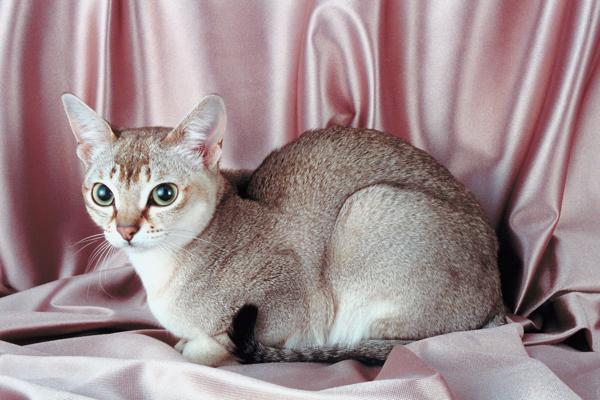 With a short coat, shedding is minimal in Singapuras. You have to brush them twice or thrice a month. Brushing also helps to keep the coat shiny, as the skin oils spread evenly. Their nails have to be clipped once a week. Start the habit when the cat is young, so that they get adjusted to it. Though regular ear cleaning is not necessary, remove dirt as and when it accumulates. You may consult your veterinarian for a suitable ear cleanser for your cat. He can also suggest a toothpaste for the cat, which can be used at times, to prevent bad breath..
In short, Singapura cats are perfect as pets, but can be highly expensive and rare to find. If you do not have a lot of spare time for your pet, then this cat may not be ideal for you. They require attention from the people surrounding them. They are also good with children. Above all, they are the smallest among the popular domesticated cats.

How Exactly is a Trumpeter Swan Different from a Tundra Swan?

admin - November 28, 2017
0
Trumpeter and tundra swans sound different, and they can be easily distinguished by their calls. While the former produce low-pitched, loud, and nasal voices;...

Guard Dogs that Don’t Shed: How Many Do You Know?

admin - November 28, 2017
0
Did You Know? Recently, Portuguese Water Dogs became highly popular after a dog from the same breed was adopted by President Barack Obama. The canine,...