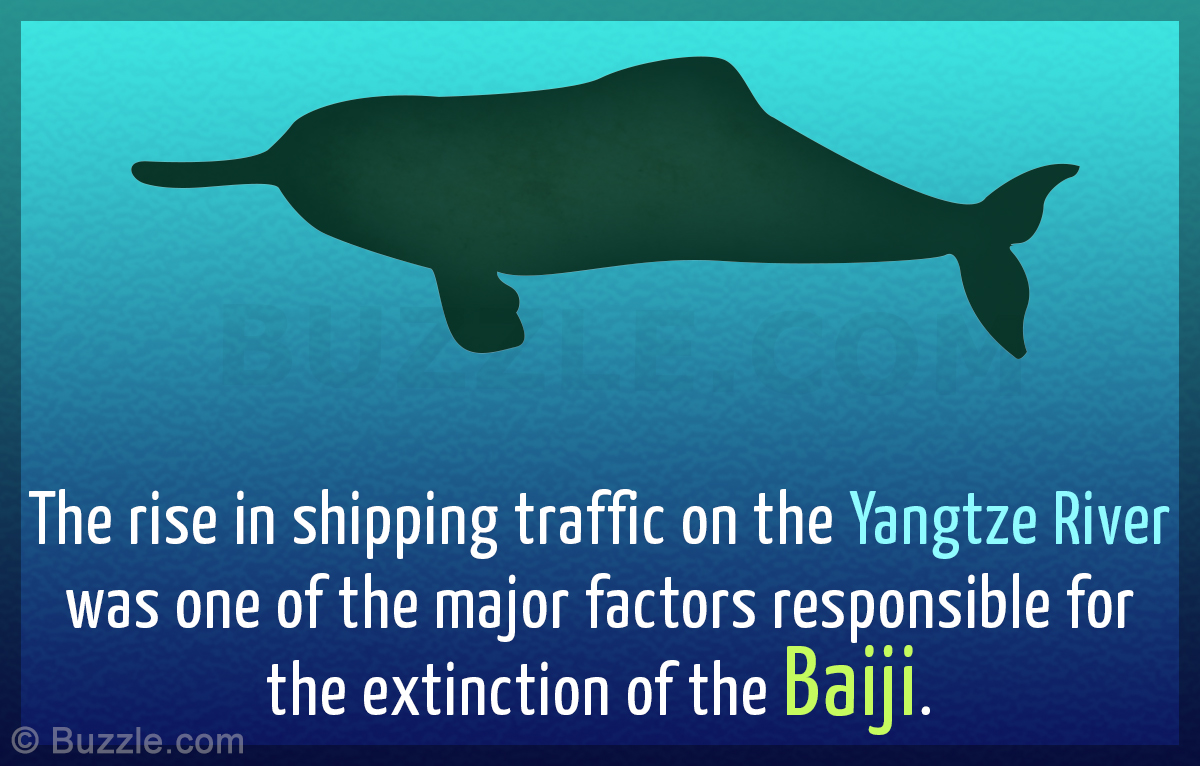 Little-known Fact
The last known Yangtze River dolphin, Qiqi died in 2002, while the last confirmed sighting of this species in the wild was in 2004.
In 2006, the Yangtze River dolphin, or baiji, was declared functionally extinct when an intensive survey involving a team of thirty scientists failed to yield any results. They looked for the species all over its natural habitat, right from the Three Gorges Dam to the Shanghai estuary, over a period of six weeks. It was the first cetacean species to become extinct as a result of human activities.
Note
A species is said to be functionally extinct when the population is no longer viable, or it has no role to play in the ecosystem. Nevertheless, it will be enlisted as a ‘critically endangered’ species for some time, before it is moved to the list of extinct species.

How Did the Yangtze River Dolphin Become Extinct?

The extinction of the Yangtze River dolphin wasn’t really surprising, as its population had taken a severe hit over the period. It plunged from over 5,000 in the 1950s to less than 400 in the 1980s, and down to 13 by 1997. As with other river dolphins, one of the major problems this species faced was that of a restricted range. It was found in the lower course of the Yangtze―the longest river of Asia. The upper course of the river was perhaps too swift for it. But then, the major reason for the extinction of this species came with the onset of industrialization in China. Each of the reasons are discussed below.
The Great Leap Forward
The Yangtze River dolphin was hailed as the Goddess of the Yangtze at one point of time, but was stripped of this status when Mao Zedong set out to eradicate superstition and idol worship as a part of his ambitious campaign ‘The Great Leap Forward’. Thus, began the hunting of this species for its flesh and skin. It was just the beginning of bad times to befall the species though, as the worse was yet to come.
Increased Fishing in the Yangtze
Also to be blamed for the extinction of the baiji was the advent of modern fishing gear, which resulted in high incidental mortality of the species. A large number of dolphins died after getting entangled in fishing gear, as they were not able to surface to breathe. Then came the concept of electric fishing, which made hunting of this harmless species even easier. By the beginning of the 21st century, electric fishing had become the biggest threat for the survival of this species.
Demons of Industrialization
✦ Things went from bad to worse, as China took to industrial development, and the environment took a backseat. The Yangtze River dolphin was one of the many species to bear the brunt of environmental pollution, caused due to the dumping on industrial waste in the Yangtze.

✦ Furthermore, when the Chinese decided to develop the Yangtze as a waterway, the riverbed was dredged and even reinforced with concrete in some places. This, along with pollution, resulted in the loss of habitat for the Yangtze River dolphin.

✦ The construction of the Three Gorges Dam didn’t just result in the loss of habitat for the species, but also provided a boost for shipping traffic. The traffic increased over the course of time, and so did the size of ships.

✦ The increase in shipping traffic also translated into more noise pollution, as a result of which the nearly blind and disoriented baiji collided with ships, and even got caught in propellers.

Despite the fact that the Yangtze River dolphin languished in the list of endangered species for decades, no concrete measures were taken to save it from extinction. In fact, even a range-wide survey was only initiated in 2006, almost a decade after it was revealed that only 13 dolphins were left in the wild. This lethargy on the part of concerned authorities was equally responsible for the extinction of this dolphin species.
Post Script: Ironically, the range-wide survey of 2006 was initiated to capture Yangtze River dolphins, and start a captive breeding program to save them.

admin - November 28, 2017
0
Dogs Can Sense Sadness Dogs can instantly understand if their owner is sad. They will try to cheer up their owner by cuddling or snuggling...

admin - February 8, 2022
0
Learning How To Help Save the Scarlet Macaw Parrot From Extinction is very important to anyone who...

A Comprehensive List of Cat Facts to Pacify Your Inner Feline

admin - November 27, 2017
0
Purring is not always an indication of happiness, a cat also purrs when it is in terrible pain. You'll be surprised to know some...

admin - November 28, 2017
0
Each breed of dog was developed with a specific purpose in mind. Some were bred for hunting, some for companionship, some for guarding, some...