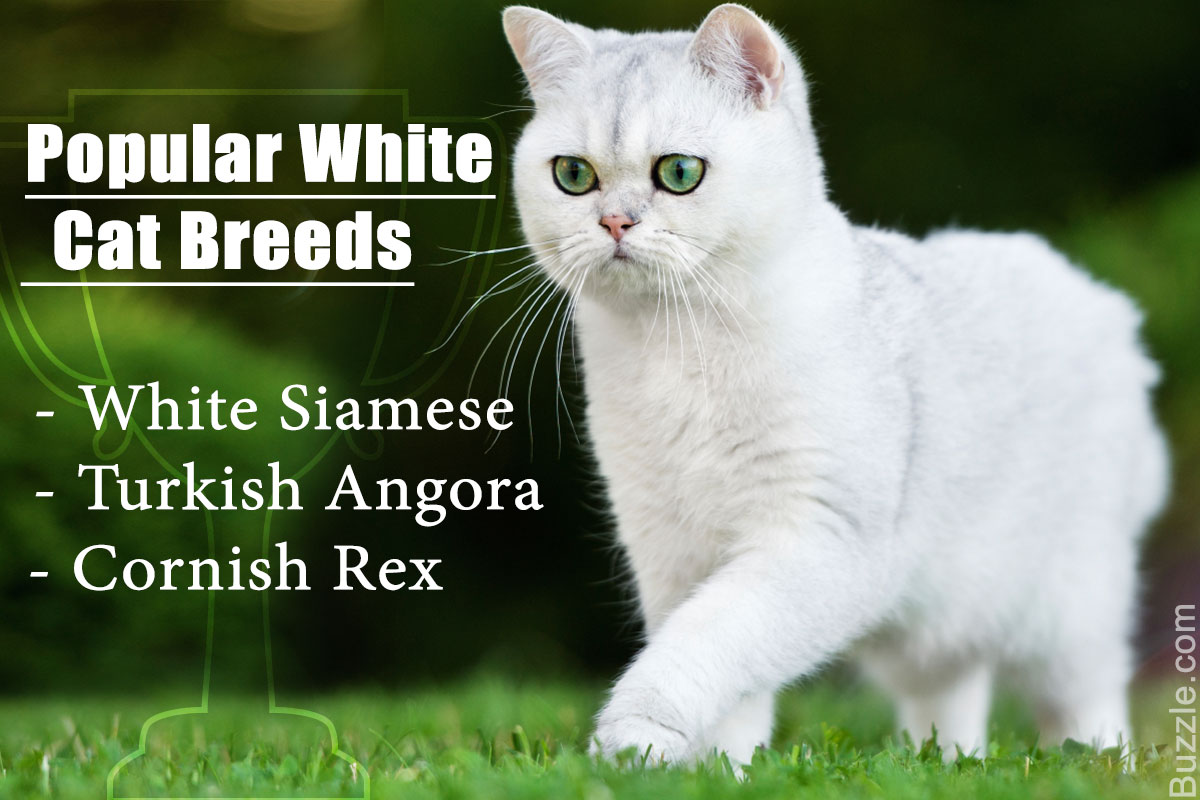 Cats are the most popular domesticated felines. There are many cat breeds that are cute and attractive. One of the most popular cat breeds are the white ones; they are incredibly adorable.
Cats have been domesticated since hundreds of years and there are many varieties of cat breeds. You will find cats with white coats in breeds like the Maine Coon, Persian, Oriental Longhair, Siberian , American Short hair, etc.
Cat Breeds with a White Coat
Cats can have different coat colors that includes pure white or white with another color, i.e., bi-colored. But, there are cars born as albinos. Some cats like the Birman cat, are born pure white and develop color as they mature. This is true for most of the colourpoint kittens, who are white when born and then develop the colors. Some have a naturally white color.
White Persian Cat 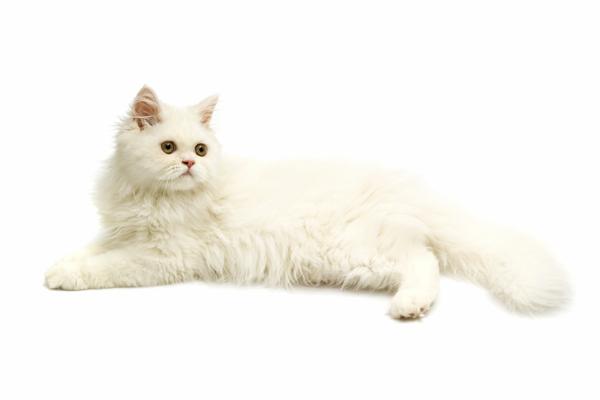 These are the most popular cats and widely sought after cat breeds with white fur. These royal divas are short and round with heads that are larger than most cats. They have the longest and bushiest coats within the long-hair group. These regal white Persian cats require extensive grooming, brushing and regular baths to keep their white coats free from matting and knotting. White Persian cats have loving personalities that prefer living in quiet and peaceful homes.
Tuxedo Cats 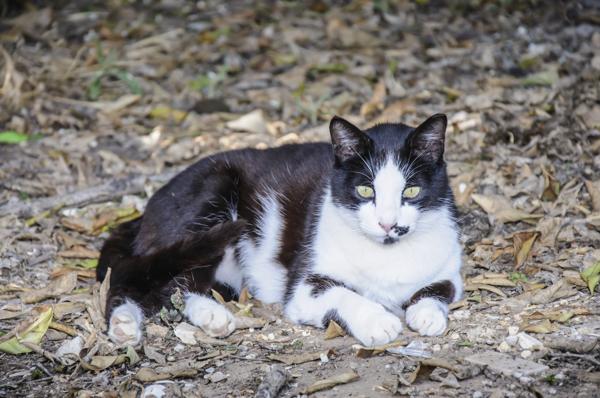 A Tuxedo cat must have solid black color throughout the entire body with few white patches on the chin, chest, belly and paws. The percentage of black color should be more than white. They look like they are wearing a tuxedo, hence the name. One should keep in mind that not all black white cats come under Tuxedo cats. They may be bi-colored, having more of white than black or maybe half black and half white. Even those with a few black patches on white body are not considered Tuxedo cats.
White Siamese Cat 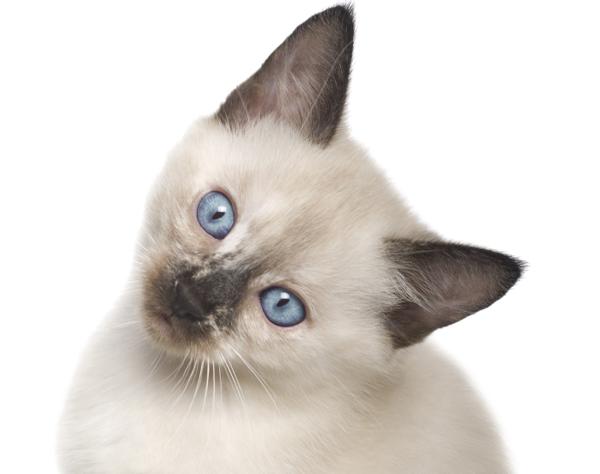 These white Siamese cats are breeds of the Oriental cats. They are from Thailand, known as Siam in the ancient world, thus the name. They have elegant, slim, flexible, and well-muscled bodies. The white ones have short, sleek hair and blue eyes. They love to be cuddled and can get very vocal when there needs are not met. They bond well with the owner and will remain loyal pets for life. These energetic cats are attention seekers. They require less grooming compared to white Persian cats.
White Bengal Cat 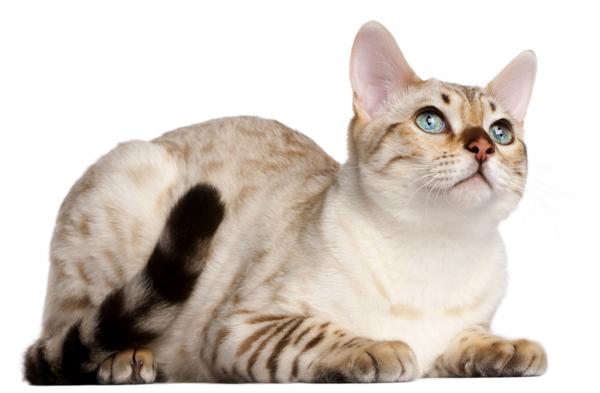 These white Bengal cat breeds are medium to large, well muscled cats. They have short and dense coat. They are a cross between the Asian Leopard cat and a domestic cat. Their bellies are white and has spots. These intelligent, active and energetic cats love water. They mix along well with people and other pets. They have a penchant for climbing and a distinct voice that can be very vocal.
Turkish Angora 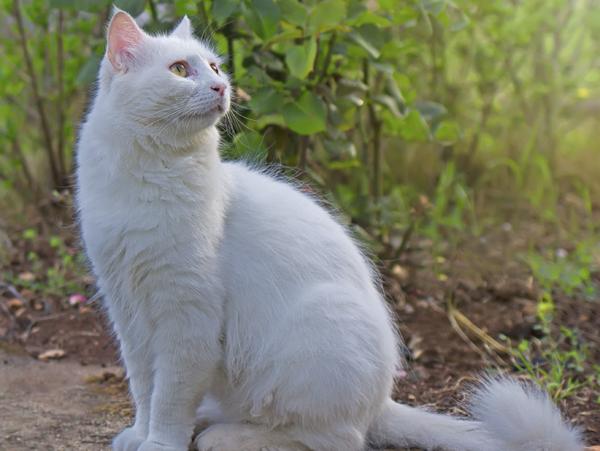 Said to have first bred in Turkey, the Turkish Angora are long-haired cats. Initially, only pure white cats were accepted as purebred Turkish Angoras. However, today Angoras in different colors are being accepted as purebred. These pure white Angoras are blue-eyed and can be partially or totally deaf. However, these cats adapt to their loss of hearing very well.
Cornish Rex 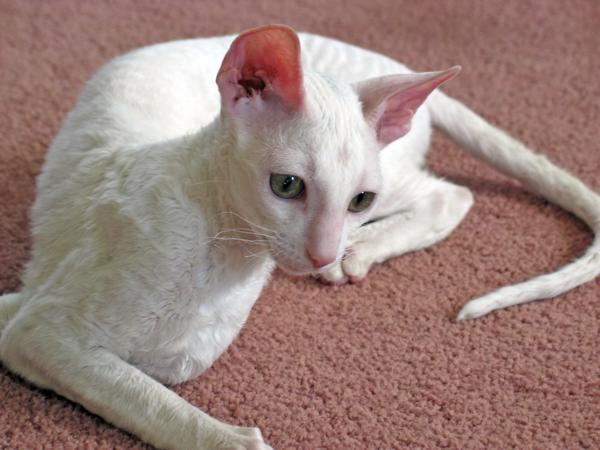 The Cornish Rex is highly active, sociable, loves to joke around, and takes part in every activity. These cats are extremely affectionate and love to play the retrieving game like a dog! Just toss an object and they will get it back to you. Also, nature-wise, they remain like kittens (playful and adorable). They love people and are extremely friendly with other animals too. They cats come in white colored coats as well as other coats like black, lilac, cream, chocolate, etc.
Few Famous White Cats
There have been quite a few white cats that have been lucky enough to gather some limelight on themselves. These fictional and non-fictional cats are famous and loved by everyone around the world.

~ Enjoras, a black kitten of white cat parents from Gautier’s La Ménagerie Intime.
~ Jess, was the black and white cat belonging to Postman Pat.
~ Seraphita, a pure white cat who has a love for perfumes and the mother of three of Gautier’s cats with Don Pierrot.
~ Sylvester, the black and white cartoon Tuxedo cat who sputtered the words “Sufferin’ succotash!” when he was thwarted by his main adversary, Tweety Pie, the canary. We all love his million tricks that he keeps trying to get hold of the canary.
~ Snowbell, from the movie Stuart Little who was a white Persian cat who was embarrassed to have a mouse as the member of the family.
~ Felix the Cat , a true star of the silent era, he is one of the most famous cartoons worldwide.
~ Socks, the pet cat of Chelsea Clinton, who is the daughter of the former US President Bill Clinton.
~ Bob, a black and white cat who was a pet of Sir Winston Churchill, the former British Prime Minister.

White Cat Names
There are many popular cat names you can use to call your fluffy white cat breed. You can try calling your cat Cloud, Cotton, Casper. You can even try Snowy, Snowball, Snow White. How about, Vanilla, Vodka or Talcum? Moonlight, Milky and Mystique sound good too. You can come up with any traditional, elegant, sophisticated or funny cat names to call your white cat.
Why Do Cats Have a White Coat?
White cats have the absence of melanin pigmentation. There are three genetic mechanisms that lead to solid white coat like:
Albino White
These cats have complete lack of pigmentation. They have pale blue eyes and this albino gene is a recessive gene.
Complete White Spotting
The cat may be partly white as the white spotting factor (S) may be incompletely dominant. In case it is complete, it may result in a fully white cat.
Dominant White
There is a mutation in the gene, that becomes a dominant gene in deciding the color factor. The resultant cat produces a white coat with blue eyes.
Interesting Facts About White Cat Breeds
~ It is a superstitious belief in many cultures that white cats are lucky and a sign of good luck.
~ White cats have blue eyes or odd colored eyes. Your white breed cat may have one blue eye and one green or yellow eye. It is seen that the cat with one blue eye may be deaf in the ear on the same side as the blue eye. Therefore, keep your white cat indoors most of the time as their deafness may lead to an injury or accident.
~ The ears are prone to sunburn. The fur is thinner on the ear and therefore frequent exposure to the sun may cause skin cancer in white breed cats.
~ The Oriental White Short Hair cat breed is not prone to deafness like the other blue-eyed cats.
~ The deafness factor is seen in cats with white spotting factor (S) and the dominant white (W) cats.
Deafness is not seen in albino white cats.
The fluffy white cat breeds are real heart stoppers, who are able to melt the hardest of the hard hearts. There are many cat breeds that you can choose from as a pet. Few of the cat breeds mentioned above, also have coat colors other than white. A white cat will need more grooming and care as their coats tend to get dirty more quickly. Although cats are clean creatures, who keep licking their coats clean, you should not be lenient when it comes to pet care. You should take care of cat health as these animals are prone to many illnesses. Enjoy having these intelligent pets with distinct personalities as your pet with an attitude!

admin - November 28, 2017
0
To list all the different types of horses in one article is impossible, simply because it's an extensive task. There are over hundred different...

admin - November 28, 2017
0
The best part of bringing home a mixed breed dog is all the unpredictability that comes with them. As far as a purebred dog...

admin - February 8, 2022
0
Learning How To Help Save the Scarlet Macaw Parrot From Extinction is very important to anyone who...